Christian Brister: My Struggle Made Me Who I Am 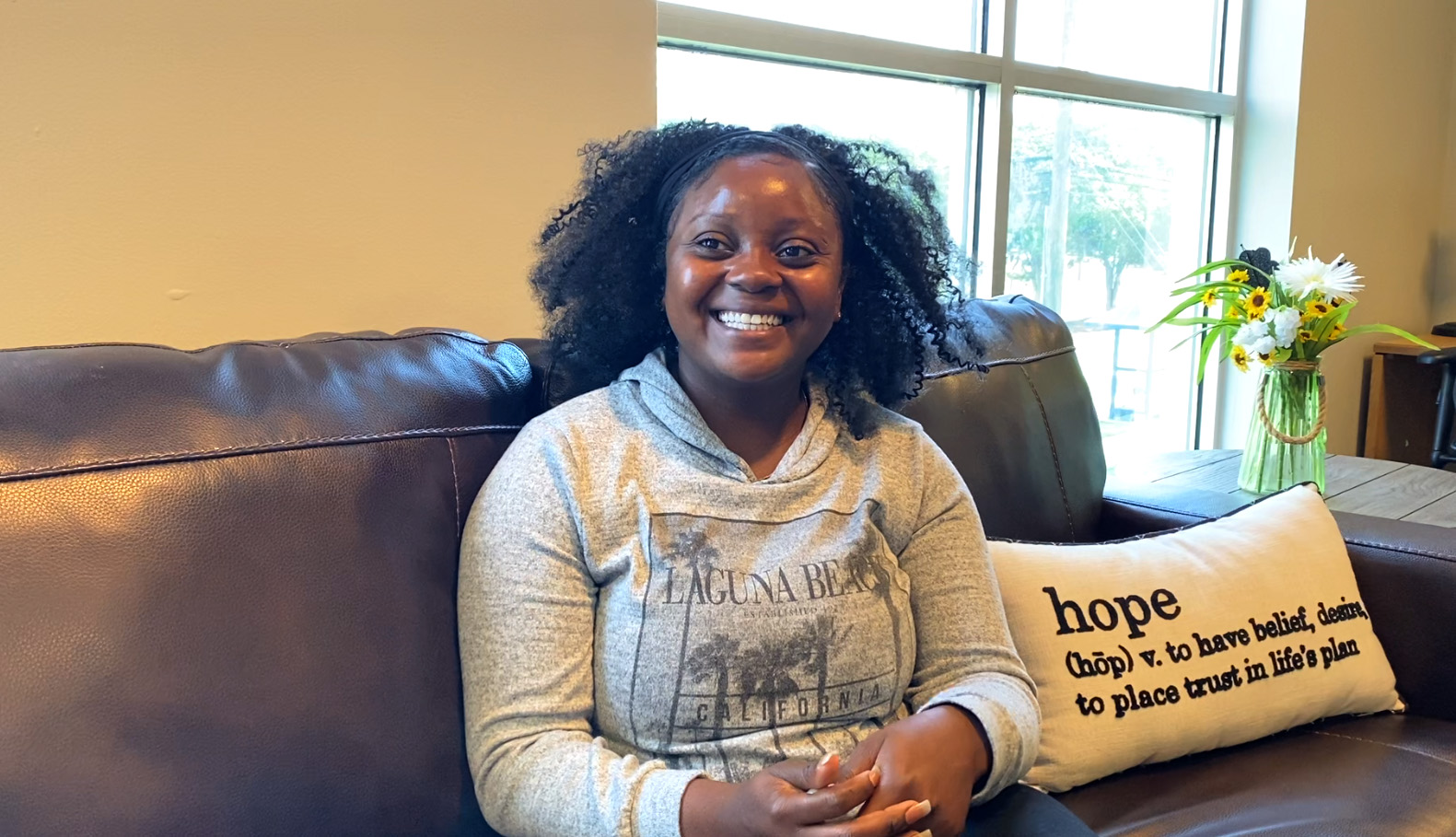 “It just brings up a whole bunch of memories, like catching the bus here and what it was like staying in the rooms and just the environment. It’s not a super happy feeling. It actually gives me a lot of anxiety, just because I’ve tried so hard before to forget that part of myself.”

Christian Brister has never been comfortable talking about the fact that she experienced homelessness as a child. Even returning to The Salvation Army Center of Hope in Charlotte was a difficult task.

“Before now, I wasn’t really comfortable sharing my story because I was just so embarrassed of my childhood,” she said. “I was so focused on everything that I was not, not everything that I was. I was embarrassed all the time. I don’t have these clothes, I’m being picked on in school. We are in the shelter. That whole mindset, that whole perspective of being ‘less than.’”

“I didn’t realize it was making me into everything that I’m going to be. Giving me that strength and character. Just experiencing my journey the way I did has created so much character in me. That’s why I am who I am.”

Christian’s childhood was less than typical. In fact, as she describes her journey, it’s evident that she was forced to bypass many aspects of her youth as she had to face adult-sized problems. Unfortunately, this is the reality too many children in our community must face.

The struggle truly began when she had to evacuate her home in Louisiana due to Hurricane Katrina.

“We didn’t really take a lot of our stuff. We just took a bag of our important papers and tried to figure it out from there.”

Her family relocated to South Carolina, but as they struggled to get a footing, they eventually found themselves in North Carolina.

Christian, her mom and her siblings bounced back and forth from living with friends to local motels and ultimately, the Center of Hope shelter.

“On top of that, I didn’t really have much of a childhood because I was always with my siblings and I sort of helped raise them, with my mom. So, we were just always struggling.”

As her mom was away working, Christian had responsibility for her siblings – making sure they made it back from school, they were fed and they finished their homework. She had to balance all of this with making sure her own assignments were completed.

“A lot of women [at the Center of Hope] are at their lowest points when they get here. They are experiencing depression and whatever else. So having that structure, having that support … is really important especially when people are probably at that point where they have lost hope. That’s why I like that it’s called the Center of Hope – because a lot of times it’s all you have, that glimmer of hope.”

That glimmer of hope always remained for Christian. One bright spot for her at the Center of Hope was the on-site Boys & Girls Club and the relationship she formed with the Club staff.

At the Boys & Girls Club, Christian was able to enhance her leadership skills as she gravitated toward helping with a variety of tasks and projects. She also got to experience a lot of fun activities, take field trips (such as to the local amusement park, Carowinds) and more. Eventually, Christian’s siblings joined the Club, which took some of the pressure off Christian.

“I had time to do my homework when I needed it. It really helped take that stress off being that second mother when I had my siblings, because I could just let them do what they wanted to do. I’m looking out for them, but they had time to be kids and I had time to be a kid. That was an integral part for me – I was able to be a kid.”

All the while, Anthony Buckson, the director of the Center of Hope Boys & Girls Club at the time, continued to encourage Christian and pour into her life.

“Mr. Anthony is very charismatic. He loves the kids. He loves everybody. You can tell he has a really big heart. He was another person who poured into me, he encouraged me, he reminded me that I was going to be successful, [saying things like] ‘Oh yeah you are going to get there, you are going to do it, I’m so proud of you.’”

Those bits of encouragement inspired Christian to continue pressing on, especially when it came to her schoolwork. School was always important to her, and she knew she wanted to go to college.

Fortunately, she had people, such as her school guidance counselor and Mr. Anthony, who believed in her and helped her along the way. She began to believe in herself.

“Mr. Anthony was one of the first people I told when I got my acceptance at UNC [The University of North Carolina at Chapel Hill]. I ran, I brought it back to him. He was like ‘Oh yeah, I knew it.’”

But, college wasn’t the happily ever after that Christian thought it might be. Once she arrived on campus, some of her old feelings of inadequacy began to resurface.

“It wasn’t like when I got to college it immediately went away. I was still struggling then, working, being a full-time student. I still didn’t have so much.”

And, she found herself surrounded by people who were more financially stable than she, so she had those familiar feelings of being “less than.”

Despite her hard work, the demands on her life, the stress and anxiety began to pile up. She was on the verge of a mental breakdown. It wasn’t until she returned a set of straight F’s one semester that she knew she needed help. She sought support from the resources on campus, and eventually decided she needed to take a semester off to regroup. She spent that time working, but more importantly, rejuvenating herself mentally. She came back stronger and was able to finish her degree in December 2020.

While she’s still working on connecting with the right opportunity to explore her passions, she knows that everything she has gone through has built her into the strong woman that she is today. She acknowledges that it’s not all rainbows and unicorns.

“I’m 25, everything isn’t glamorous, you know, I’m not going to lie, at certain points I did feel like I should be better off than I am right now.”

But, she also now takes pride in where she came from.

Wise beyond her years, Christian offers these words of encouragement for the next generation going through struggles: “Everything in life is temporary. Where you are now is not where you are going to be forever. One of the best things that I did for myself is that I gave myself the opportunity to see where I could be, where I could get to, where I could go. If I wanted to give up on myself when I was [at the Center of Hope], or when I was having my mental breakdown during school, I wouldn’t have the chance now to see just how beautiful life can be.”